It is worth mentioning that the most well-known entrepreneurial instructor in China also advises entrepreneurs who are interested in starting a business in the field of artificial intelligence.

In this long-running speech, the first "scientific style" of artificial intelligence, deep learning, and Google's ambitions was revealed.

The following is a record of Li Kaifu's speech:

thank you all! I am very happy to have this opportunity to come to Tsinghua again, especially under the invitation and introduction of Professor Yao Zhongzhi, my most respected. Professor Yaoâ€™s Yao Ban has a good reputation all over the world. From Google to the innovative workshop, I saw that there are many successful engineers who have become the top talents in the computer industry under the training of Mr. Yao.

Before I talk about artificial intelligence, I would like to introduce some of my backgrounds that may not be well known: In fact, before entering several major international companies, that is, more than 30 years ago, I entered the field of artificial intelligence. I was the first natural language processing in 1980, computer vision in 1982, speech recognition in 1983, man-machine game in 1985, VR/AR in 1996... but we now know that at that time I These choices are basically very "bad mistakes" career choices, because every thing, I was involved in the era before its golden age, before the Silver Age, and even when the iron and iron were not. From this matter, in fact, I also want to say that in the field of computer research, the quality of its own is of course very important, but it is necessary to choose the right thing at the right time. I jumped into the field of artificial intelligence too madly at the wrong time. At the same time, the artificial intelligence of the past three or four decades was also ups and downs. It was very hot and fell to the bottom.

Artificial intelligence is a tool

Recently, artificial intelligence has become a hot topic in the world. Many of them are because AlphaGo beat Li Shishi a few months ago. Recently, it was reported on the Internet that it would challenge Ke Jie before the end of the year. But under the heat of this news, one thing makes me feel a pity: everyone's discussion on this topic is focused on whether artificial intelligence is imitating the human brain, whether the "singularity" is about to come, but There is no real concern about the real impact of artificial intelligence on us.

I think most of you will believe this theory, and if you have doubts about it, you can think about why AlphaGo is so powerful? It is because it can use thousands of machines to play against the tens of thousands of games every day, and this person can't do it; why is automatic driving so powerful in the future? Because it can collect data on the road with its various sensors, this is not a driver can match. So these are some inevitable processes.

What is artificial intelligence? I think there may be several parts about it.

The first is perception. Perception includes vision, speech, language; then decision-making. Just do some predictions and make some judgments. These are decision-making levels. Of course, if you want to do a complete system, just like a robot or It is autopilot and it will require a feedback. 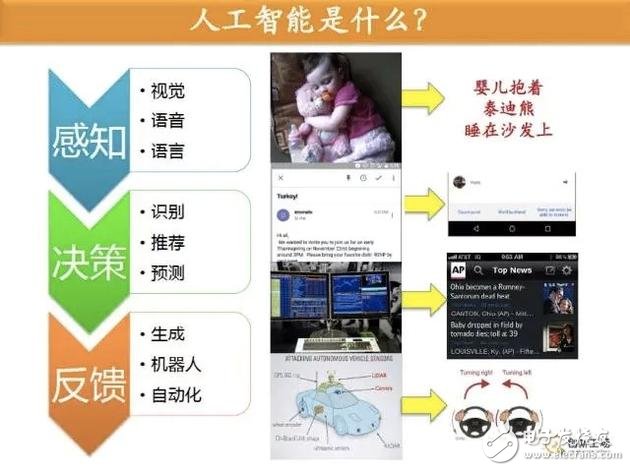 As you can see in these examples, the perception may be more to help identify a baby inside the figure holding a teddy bear on the couch. In the recommendation above, the example I gave is a use of Google now to speculate on what you are going to do through the past. In the bottom example you will see an unmanned car with various sensors. The information it captures can be used to make final decisions, such as how to operate the steering wheel, throttle, brakes, and so on. In fact, the sum of these three things is the artificial intelligence that is summarized today.

Then review the development process of artificial intelligence from four aspects: game, perception decision and feedback. The game doesn't talk too much today, but basically I can see Othello from my college to Checkers and then to DeepBlue chess. After a long period of time, AlphaGo finally defeated the World Championship in Go. We can see from this that this is a journey of more than 30 years. 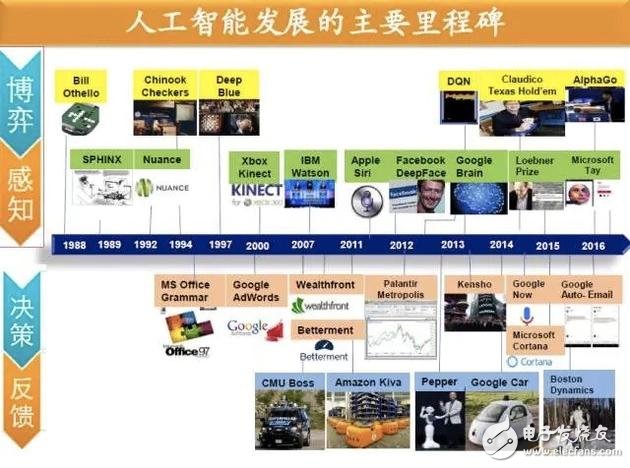 Milestones in all stages of artificial intelligence development

In terms of perception, from the publication of my doctoral thesis to Nuance becoming a top company, from China, the birth of the University of Science and Technology to the United States, Deep Face, China's Face++, etc., have become better and better, and there have been many in these years. progress. There are some very special examples. For example, I recently saw some funny comparisons. Microsoft Tay started talking to people on Twitter and talked about a bunch of unfortunate words. It was withdrawn by Microsoft, so there are many successful examples here. A lot of interesting events.

Decision-making, from the tools of the early Microsoft Office to the recommendation of Google advertising, and then to the emergence of many intelligent decision-making companies in the financial industry, rapid progress. Google auto mail may not have been seen by everyone, but if you still use gamil, you will find that you sometimes receive emails, Google will jump out and ask if you want to reply, sometimes it will help you write even the reply. And written very accurately. This is also the embodiment of artificial intelligence. Maybe we will not talk in the future, the assistant can help us get it, the assistant of artificial intelligence is definitely a direction.

Finally, feedback, from the early unmanned driving of CMU Boss to Amazon's promotion of logistics with Kiva, to the recent Pepper, Google car, we can see the special heat of this field in the past three or four years, many seem to have commercialized Very good.

Antenk has engineered the d-sub adapters & gender changers that you need for those applications that require equipment that can't be connected directly.

Antenk's D-Sub Backshells are designed to maximize EMI/RFI shielding for optimal protection and performance. Our comprehensive d-sub backshell product offering features a variety of options that improve the connection stability while maximizing cable strain relief in order to prevent damage to wires and contacts.

The Antenk D-Sub Backshell product offering is available in Die-Cast, Metalized Plastic and Plastic Shell options depending on the application and level of signal protection required against shock and vibration. The Antenk d-sub backshell connector housings are available in up to 5 industry standard shell sizes: 9 pin (HD15), 15 pin (HD26), 25 pin (HD44), 37 pin (HD62) & 50 pin (HD78) positions. If there is a combination of mounting hardware and cable exit angle not available in our standard d-sub backshell product offering above, please contact us directly for any custom or semi-custom backshell design project.

Previous: How to wear a headset to show the best sound?

Next: What is the ambition of Li Kaifu's artificial intelligence and deep learning of Google?